Micro LEDs are an exciting new technology that offers the potential to revolutionise the display industry. This Samsung 146inch micro LED TV “The Wall” shown at CES 2018 is a great example of the exciting opportunity that micro LED presents. “The Wall” showed amazing contrast and brightness. The micro LED technology is capable of providing the better image quality compared to OLEDs with the added benefits of reduced power consumption and increased lifetime.  Samsung is not the only one company investing in the technology. Other major consumer product suppliers such as Apple or Sony are also looking at developing their products further using this technology to use in smartwatches, phones and AR/VR. The list of patents created is growing fast with the technology giving birth to a lot of start-ups. 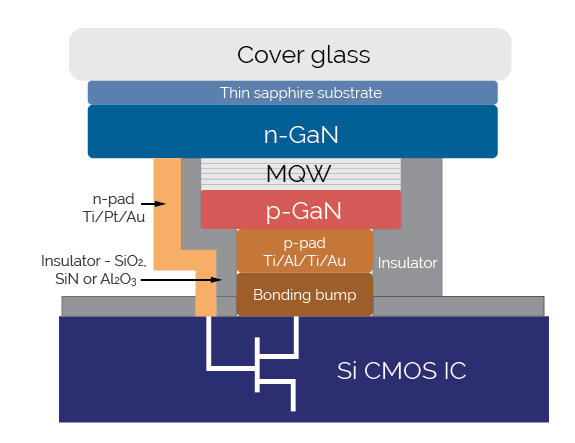 The micro LED technology still has a few challenges ahead. To meet the high volume production demanded by the consumer market, the fabrication process flow has yet to be optimised. The skills and knowledge from both LED manufactures and display suppliers has to be combined and supported by an innovative assembly and testing line. The assembly has to be capable of mass transferring millions of LED to a control circuit panel at ±1.5µm accuracy with mass inspection capability for early repairs. Additionally, details of the pixel architecture and driver have yet to be defined.

As an inorganic LED structure can only emit monochromatic light, an arrangement of red blue and green LED must be fabricated to get full colour emission. Array of micro LED must be produced at small pitch with a Thin Film Transistor (TFT) plane used to control each pixel. An example of structure is given below. Each pixel within a display is individually driven to create the brightness and sharpness which makes this technology stands out.

The design of the single LED within a pixel is also to be defined. Several options exist such as flipchip technology. Oxford Instruments Plasma Technology has many years of experience in supplying LED manufacturers. Some of our solutions includes fine pitch sloped mesa, fine pitch dielectric passivation for reliability and insulating material to stop crosstalk between pixel.